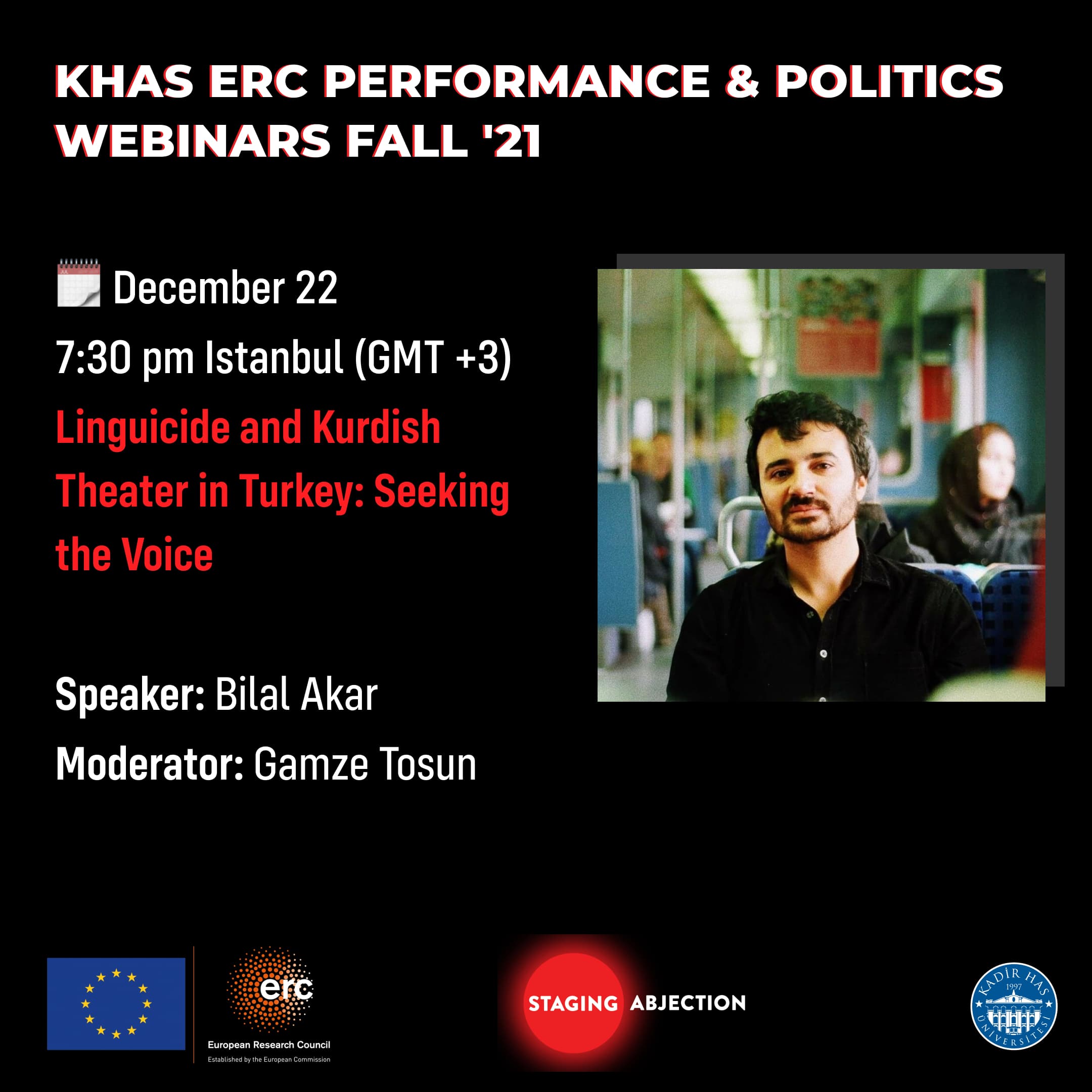 Linguicide and Kurdish Theater in Turkey: Seeking the Voice

The webinar will be in English.

Please register in advance for this meeting:

The narrative about the emergence of modern Kurdish theater in Turkey often accepts Evdirehîm Rehmîyê Hekarî’s 1919 play Memê Alan as the first Kurdish play. As a result of the political oppression and bans, however, there have not been continuous Kurdish theater practices in Turkey. Between 1919 and 1991, there were only three known Kurdish plays written in Turkey. The total number of written and staged Kurdish plays in Syria, Iraq, Iran, and SSCB during that period is around 500. With the repeal of Law No 2932 in 1991, the ban on the usage of the Kurdish language was officially removed. Yet, the political oppression and effect of the language ban have never ended.

Since 1991, the Kurdish theater field has faced ongoing effects of the linguicidal policies of the republic and negotiated the changing politics of language and identity. This presentation will focus on the effects of these linguicidal policies on the production of Kurdish theater texts, the limited number of artists who can speak in their mother tongue, the debates on the usage of local dialects, surtitles, and assimilation, hybridization, non-verbal plays, and multilingualism.

Bilal Akar is a Ph.D. candidate at Boğaziçi University. He received his Master’s degree in Comparative Studies in History and Society from Koç University with a thesis titled “Transformation of Kurdish Theater Field in Turkey 1991 – 2017.” His recent study focuses on statelessness, fragmentation of Kurdish diaspora, identity construction, and representation of Kurdishness through theater in Europe. The research aims to make a comparative analysis of Kurdish Theater fields in different countries by engaging with several interwoven theoretical fields, including postcolonial criticism, political economy, Bourdieusian field analysis, and diasporic art studies.

Kadir Has University's website uses cookies to provide an adequate user experience (Cookie Policy). You can view the Informative Text on the PPD Law (KVKK) within the scope of the law on protecting personal data here.
No, ThanksAccept
Manage consent